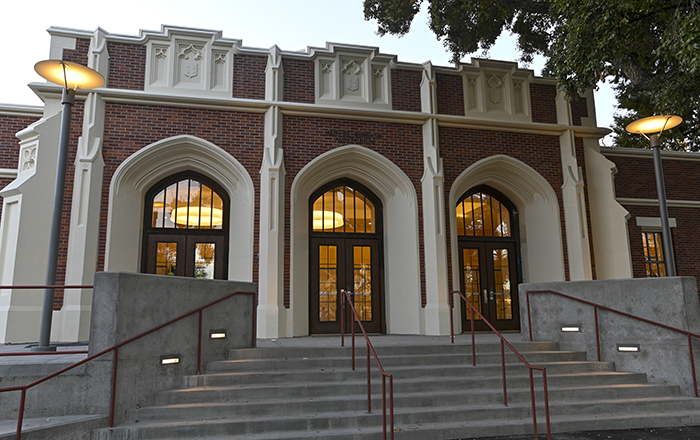 Burbank Park was acquired by the Board of Trustees in 1930 as the permanent campus site for SRJC. It was a location utilized by Luther Burbank for botanical experimentation. The "Plant Wizard" came to Santa Rosa in 1875. He developed more than 800 plants, fruits and flowers, including the Santa Rosa plum, the Idaho potato and the Shasta daisy. Burbank Gardens was owned and operated by SRJC for more than 20 years (1934 - 1955).

As one of the oldest buildings on campus, SRJC’s Luther Burbank Auditorium was ready for a renovation after eight decades of delivering rousing and talented performances, musicals and theatre productions to the North Bay. The Auditorium was selected for the first major capital improvement project of the District’s Measure H bond and commenced in January 2018.

The renovated theater has a capacity of 400 and a new studio seats 200. A beautiful, large and redesigned exterior space is ideal for outdoor receptions and events, and allows patrons a place to mingle before and after shows. An enlarged lobby serves both the existing theater and studio addition.

The main residents of the new and renovated spaces will be the Theatre Arts Department which consists of two exceptional programs: the yearly academic program and SRT (Summer Repertory Theatre Festival), the highly successful professional training program.