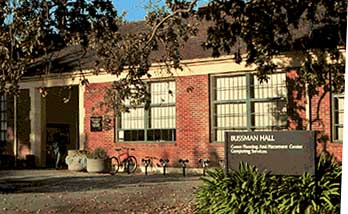 The original and official name was "Industrial Arts Building," but it received the "Bussman" designation in 1953 when buildings were named for deceased members of the Board of Trustees. Bussman Hall was designed as an industrial arts building with a museum. Jesse Peter gave his personal collection of natural history to SRJC in 1932 and Bussman Hall was built in 1939, providing a home for the ever expanding number of contributions.

Two remodeling jobs adjusted the original structure. In 1962 the automotive and welding components were enlarged considerably, In 1982, following completion of Lounibos Hall, the occupants of Bussman Hall changed. Electronic technology is the largest inhabitant. Others include Career Center, Computing Services, job placement and work experience. Meanwhile, the museum was subject to an earlier adjustment when the space was divided into the Art Gallery and the Jesse Peter Native American Art Museum in 1973.