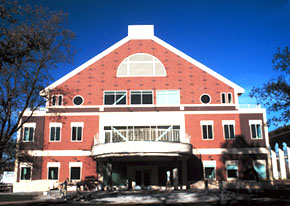 This building is a multi-functional health science and student health service facility. It was dedicated on January 7, 2000 in honor of one of the college's foremost trustees, William B. Race. It has 38,500 gross square feet and 28,500 assignable square feet. It is primarily a laboratory facility with state of the art dental, radiation technology, nursing skills facilities and equipment. There are four lecture rooms, one of which has a rather large impressive vertical folding wall which splits one 100 seat room into two smaller rooms with capacities of 75 and 25 student stations each. Faculty and administrative offices for the Health Sciences will be located primarily on the third floor whereas the Student Health Services operation will be located on the west side of the first floor.

Second Floor Veranda: Both the veranda and the lower patio-type entry way were designed to assist in ceremonial duties. If desired, for example, speakers could address a graduation crowd from either location thus affording the audience easy view of the proceedings. Also, the south facing portion of the new building will (hopefully) someday be facing a new library facility thus tying the Emeritus/Plover/Race complex to the academic core of the campus.